Jozef Baj (1915-2006, pronounced: ”bai”) was a skilled engineer, designer and constructor of pendulums and a founder of radiesthetic workshop ”BAJ”.

Today, BAJ pendulums and other radiesthetic devices are well known internationally for their excellence. The pendulums are created with superb precision, vibratory quality and accuracy. They are used and admired by dowsers and radiesthetists around the word – In search for water, minerals, missing objects, but most of all for healing.

Life did not spare Jozef Baj’s hardships. Nazi occupation, conspiracy work, and life in unbearable conditions of concentration camps where his adventure with pendulums began.
In Auschwitz concentration camp he was a prisoner no. 119185, when he met Rudolf, co-prisoner, a Swiss of polish, decent dowser. They quickly become friends.

Jozef exhibited incredible DIY skills since he was a small boy. These skills become very useful and life saving sometimes during difficult times of his life. He was knitting socks, scarves, and sweaters for himself and his fellow prisoners. 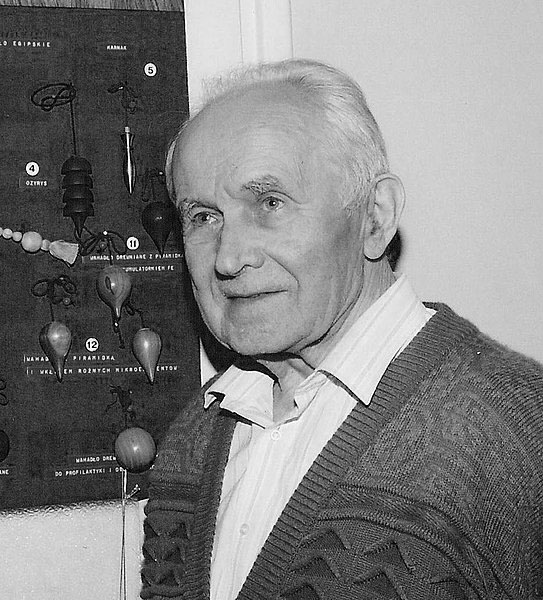 It was the Swiss friend who introduced Jozef to the Art of radiesthesia and Jozef turned out to be an extremely talented student.
The Germans quickly got to know their skills. Before long they were ordered to designate a place to dig a camp well together. Threatened that if their indication would be wrong, the hole would become their grave. Fortunately, the dowsing talent didn’t disappoint hem.

Rudolf was fascinated with his Polish companion and his ability to learn quickly and create excellent pendulums with just a penknife. These tools were often the only diagnostic and therapeutic means available in the camp conditions. The equipment did not give a way to the pendulums the Swiss used before the war time.

They have even decided to create the company in Switzerland creating radiestetic equipment after the war. However, their paths were separated when Baj was transferred to Oranienburg and then to Ravensbrück. They have both survived the camps. Although Rudolf returned to Switzzerland and died shortly thereafter.
Jozef Baj returned to Warsaw and continued developing his dowsing skills and passion.

Baj’s research focused on the work of Russian and French classical dowsers; Enel, A. de Belizal, L. Chaumery and P.A. Morel. He also developed his own version of the Universal Pendulum which very quickly became one of the best made models available to this day. He also extensively researched the classical Egyptian pendulums; Isis, Karnak and Osiris and created his own versions respecting proportions and energetic qualities.

Joseh Baj has dedicated his latest years to the field of therapeutic radiesthesia. He focused on introduction pendulums with a charge – a collection of pendulums with the accumulator consisting of many natural herbs, micro and macro elements and minerals. They are transmitted vibrationally to the human organism and considered very beneficial.

Jozef Baj has also developed and re-introduced new concepts in the field or radiesthesia. Pendulums such as ‘White energy’ Karnak or Osisris are constructed to emit the White light energy band instead of Negative Green.
His “macro” designs are also very useful tools in the therapeutic radiesthesia field.

Development of Baj pendulums had definitely opened a new chapter in therapeutic radiesthesia. They are known, admired and used by many dowsers and radiesthetists around the World.

BAJ Pendulums
Pendulums with a Soul